Well with our new move to Seattle, I almost forgot the pleasures of reading
But as I am starting to find my new routines I am discovering the joy of audiobooks once again
Here is what I read in December

Hiss and Hers by M.C. Beaton
Always a joy to discover a new Agatha Raisin mystery - really enjoyed this one as well
The stories are so formulaic
But what is wrong with that

The Under Dog and other stories by Agatha Christie

Thirteen at Dinner by Agatha Christie

The Troubled Man - Kurt Wallander
Have not finished this one yet - its masterfully written but slightly heavy
Posted by Floortime Lite Mama at 8:38 AM No comments: 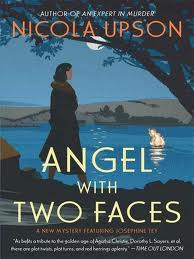 Enjoyed this book very much like I enjoy all of her novels
Her plots are intricate and usually center around an atypical sexual relationship - in this case incest !
I am also surprised by the number of characters in her books who are gay
Her characters are so well drawn out, so very English

Posted by Floortime Lite Mama at 9:49 AM No comments: 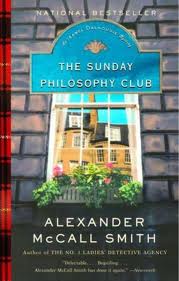 I have tried several times to read this book
And finally succeeded in reading it in the car
The thing is this book is tolerable but only barely
And it is a little  surprising that Alexander McCall Smith wrote it
Isabel is nice
Can one say something more bland and dull about a person ?

Posted by Floortime Lite Mama at 6:45 AM No comments:

The Confession By Charles Todd 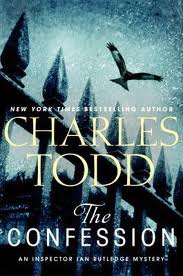 J. Lesley TOP 500 REVIEWERVINE™ VOICE
Format:Hardcover|Amazon Vine™ Review (What's this?)
What does a Scotland Yard Inspector do when he is presented with a confession to a murder yet has no other concrete details? Well, if he is Inspector Ian Rutledge he worries over it like a bone until slowly the pieces begin to come together to present a picture of murder. But who was murdered? Who confessed? What happens once the body of the supposed murderer turns up himself a murder victim?

This latest in the Ian Rutledge series of mysteries set in Britain after the close of World War I is slow to start simply because there is nothing for Rutledge to use as evidence to get an investigation going. Evidently Scotland Yard could not launch an investigation simply because someone confessed to a crime. Rutledge, however, is nothing if not determined and he knows there is a crime from the past which needs to be resolved. While doing that, he finds the hand of the murderer extending into the present. This tiny fishing village in Essex had secrets stretching back through the years which the inhabitants willingly kept covered. Now Rutledge finds himself targeted because his investigation might reveal the very past and present the villagers are all in collusion to hide.

As I have found with each Charles Todd mystery I have read, this one is a definite step above most period mysteries written today. The plot for this one continued to change and grow with almost every passing chapter so that I could never get completely comfortable thinking all the links between characters and situations had been totally established. I enjoyed that aspect of the story even though it made for a very evolving story. Don't think you will be able to settle in with this one after reading the first several chapters because it keeps adding information to make significant plot leaps throughout the book. I had to read one chapter twice to make sure I knew exactly who that character was. Part of that is because these authors succumbed to one of my pet peeves and named too many of their principal characters with names beginning with the same letter of the alphabet. Why do authors do that? They have twenty-six letters to chose from and yet two principals here have similar names and it turns out to be extremely important. This story might present some small problems for readers new to the series. There have been two women in Rutledge's life, both are mentioned in the novel, but neither is explained in any detail. Having read all the books I understand the references, new readers will not have a clue! Hamish MacLeod, the voice of a soldier killed in the war who speaks in Rutledge's mind, is not nearly as much of a factor in this novel as in most others. If it sounds like that might add a paranormal element to the story, don't worry, it does not. Rutledge suffered from a severe case of shell-shock and Hamish is the residue of the battle Rutledge fights every moment with his mental disorder. I will say though, to new readers, Hamish and that entire situation can take a while for you to become comfortable with. Readers either accept him as the authors write him or he ruins the series for them.

I have always been more than willing to recommend the Charles Todd novels to other mystery readers. For me this was another very good, satisfying entry in this series.
Posted by Floortime Lite Mama at 8:09 AM No comments:

An Expert in Murder by Josephine Tey

Ahhh the joy of discovering a new mystery author

Reading this ,  I felt like a discovered a more complex agatha christie !!! 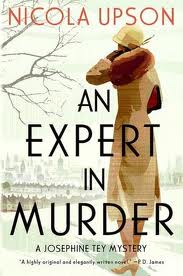 In both crimes there was a terrifying lack of humanity, a mockery of the dead which chilled him (Penrose) even more than the loss of life itself."There is an old-style elegance to this richly atmospheric mystery set in the world of the theatre during the early 1930's. Mystery writer and playwright Josephine Tey is the central character in this story of a shocking murder onboard a train. The investigation slowly reveals a tangled web of events harking back to the Great War, the complexity of which is only illuminated at the end, showing just about everyone remaining to be a victim in the tragedy.Nicola Upson has written a beautiful and involving mystery which transcends the genre. By framing her novel around Josephine Tey, it allows her to paint a vivid picture of the period and the emotions still lingering after the Great War. You really feel like you are in Tey's era while reading this. While Tey could have become just a plot device in another author's hand, she becomes a real person, as do many of the other characters, including her romantic interest, Inspector Archie Penrose.Tey's most successful play, which made Sir John Gieguld a star, is where danger lies. But it is on a train from Scotland to London where Josephine meets a special young woman full of life and simple charm. On her way to meet her boyfriend, Elspeth will meet evil and not live to know the reasons why. Upson paints a sweet and romantic picture of the times themselves, and Elspeth, giving her murder a poignancy which tells the reader right away that this mystery is going to be something special.As Archie investigates and Josephine mingles, every character is fleshed out in a way we used to see during Tey's era of great mystery writers. Josephine takes a back seat during the middle portion of the book as we are treated to lovers and sickness and old wounds and bitterness, all creating an intricate mystery which has the reader wondering how any of this touched the far removed adopted girl who closed her eyes for the last time onboard a train to London. But then a second particularly vile murder much closer to Josephine's play takes place.Archie and Josephine begin to untangle the ties which led to the murders from different angles in the last portion of the mystery. There is an exciting rush to reach the end for the reader, by now aching to discover the entire twisting series of events that began in a tunnel during the war and ended tragically on a train bound for London. There is a tenderness to the conclusion, showing the anguish and aftermath of the Great War and the many lives it took, some in ways unexpected and far reaching. Archie and Josephine's relationship does not go untouched by events either, giving the reader a thirst for more.This is a fine, atmospheric mystery with much to offer those who enjoy a good novel which just happens to be a great mystery as well. Highly recommended!
Posted by Floortime Lite Mama at 5:51 AM No comments:

Rex: A Mother, Her Autistic Child, and the Music that Transformed Their Lives 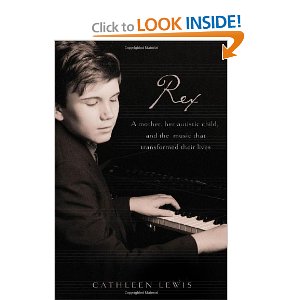 Another book I really enjoyed
Its by Cathleen Lewis

This review is from: Rex: A Mother, Her Autistic Child, and the Music that Transformed Their Lives (Hardcover)I just finished "Rex" by Cathleen Lewis, about a mothers complete devotion to her child who was diagnosed with a large brain cyst at birth then 6 months later with blindness due to an underdeveloped optic nerve. It is so completely moving and keeps you right in the moment with both of them. The transformations that occur in their lives are charged with so many emotions, which are expertly conveyed by the writer. With every small success Rex has, a new roadblock seems to be thrown down. To say it is inspirational is a tremendous understatement. This is a fantastic book for anyone to read. Enjoy!
Posted by Floortime Lite Mama at 12:14 PM No comments:

Email ThisBlogThis!Share to TwitterShare to FacebookShare to Pinterest
Labels: Autism 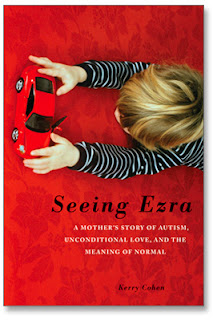 I enjoyed this book very much !
There are a few things I disagree with
I wish Kerry would self-flagellate a little less ( though I identify with it for sure )
Posted by Floortime Lite Mama at 12:10 PM No comments: 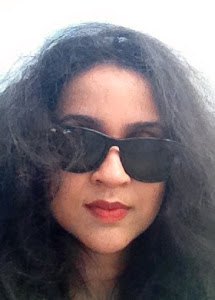